How Do Security Cameras Prevent Crime? 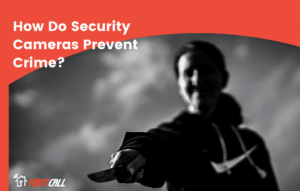 How Do Security Cameras Prevent Crime?

Most homes and businesses today take the most common protective measure to install security cameras or surveillance systems. It has been calculated that a house that has a security camera installed is 66% less likely to be robbed or broken in than one without a camera. The psychology behind that is elementary, actually. Burglars and criminals see cameras as a threat and proof of their actions. No one wants to be recorded, especially if they are committing a crime.

However, the debate on whether or not they are tools that deter crime or are just another way to infringe on people’s privacy lingers.

There have been several case studies that indicate that cameras do indeed deter crime. The University of North Carolina found that half of the surveyed burglars fled from the place after they saw a camera; also, upon interviewing burglars, 60% of them claimed that they would not have done so if they knew there was a camera. A UK-based study showed that cameras effectively deterred other types of crime by 51% as well!

Houses and workplaces are not only vulnerable to burglars or people that are breaking in. In fact, many workplaces suffer from internal crime by employees, or other people who have unguarded access to the materials in the building. A house has many valuables, such as jewelry and cash. So does a workplace. Without a monitoring system, it is impossible to tell who committed the crime, and such a theft can be devastating. A news report claimed that US-based businesses lost around $50 billion in the face of internal crime back in 2017. Therefore, Surveillance cameras are seeing a rise in popularity.

Things to Consider When Talking About Security Systems

There are many merits to security camera systems when we look at them. But civil liberties advocates seem to argue that it is an undue invasion of people’s privacy. They claim that if allowed without restriction, these cameras could be installed in most private places. However, if appropriately regulated, there is a way to curb crimes and respect people’s privacy. Here are a few considerations regarding camera systems and their use;

Public monitoring using surveillance cameras will continue to grow as the world progresses to a future where technology is more reliable. Video surveillance will continue to help in the detection and apprehension of criminals. As the merits of these systems grow in the eyes of authorities, the chances that their imposition would increase are great. But as with all other things, till camera surveillance is regulated correctly, it will continue to cause uproar amongst people.

Where Are Surveillance Systems Most Effective?

While anyone can benefit from a video surveillance system in one way or another, they are the best in crowded, public places. Below are some examples;

Parking lots and garages are places that are usually packed with cars. Most of these garages are well-lit even at night-time. When a site has many vehicles, it has many opportunities as well, and thieves know that. The more cars in a parking lot, the greater the chances that someone might have left their door unlocked or have left valuables inside their vehicles. With the right camera system and attendants at the parking spot, the detection and apprehension of the criminal can be done flawlessly

Criminals have the mindset that getting away with a crime when people are distracted is easy. An example of this is a construction site. Even though there are sometimes from ten to fifty workers at such a site, they are distracted with their work, and a lot of sound and debris allow for the success of someone deceiving.

Shoplifters also function similarly. When they note that the numbers of customers in shops are more than what the shop’s personnel can monitor, they blend in and steal merchandise with ease. A sound video surveillance system would record the individual’s face and the details of the stolen goods. They can be the means of deterring crime and aid their investigation.

Public transportation systems are the most favorable places for people who want to commit a crime. They are sometimes very overcrowded, and they are almost all the time understaffed to monitor the passengers. The most common crimes that occur on public transports are pickpocketing and fare evasion. In some rare cases, assaults arise too. The best way to prevent crime and aid investigation here is a camera as well. When people know that they can be seen if they avoid fare or pickpockets, they will be much less likely to do so.

Our experts are part of a hand-selected team of security professionals who will guide you through a plan that will fit your company.